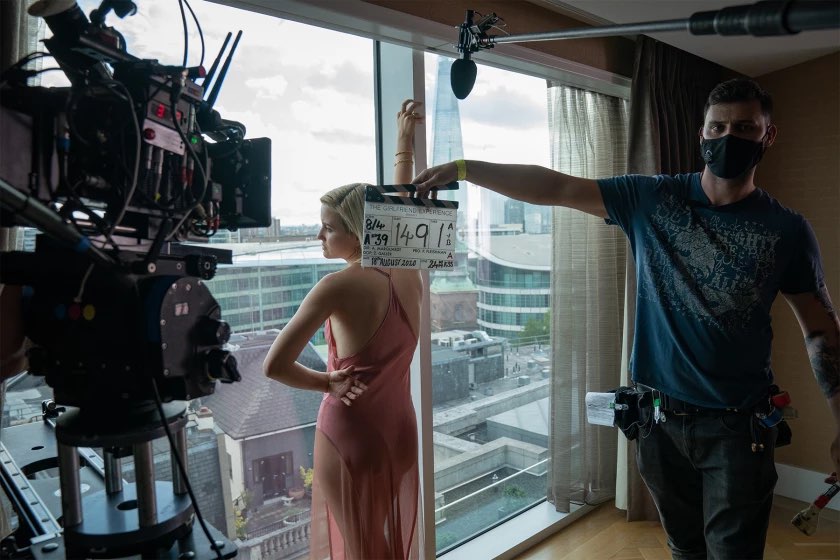 19 May 2021
by Administrator
Business
0 comments

Returning after some 3½ years, the third season of Starz’s “The Girlfriend Experience” continues the series’ atmosphere of icy remove as it explores the transactional nature of work and modern life, this time with an added layer of technology-induced uncertainty.

The new season, currently airing Sundays, stars Julia Goldani Telles (“The Affair,” “Bunheads”) as Iris, an American behavioral and neuroscientist who, while researching artificial intelligence at a tech start-up in London, begins to work for an elite escort service. Once again, the series’ hallmark is as much a vibe as anything: tightly controlled emotions, stylish locations, discomfiting sensuality.

Based on Steven Soderbergh’s 2009 film “The Girlfriend Experience,” starring Sasha Grey as a young woman who works as a high-end escort providing emotional intimacy along with sex, the series has pursued an unusual auteur-driven anthology structure. The first season, which starred Riley Keough, was written and directed in collaboration by independent filmmakers Amy Seimetz and Lodge Kerrigan. For the second, Seimetz and Kerrigan separately wrote and directed two distinct stories, one starring Anna Friel and the other Carmen Ejogo. 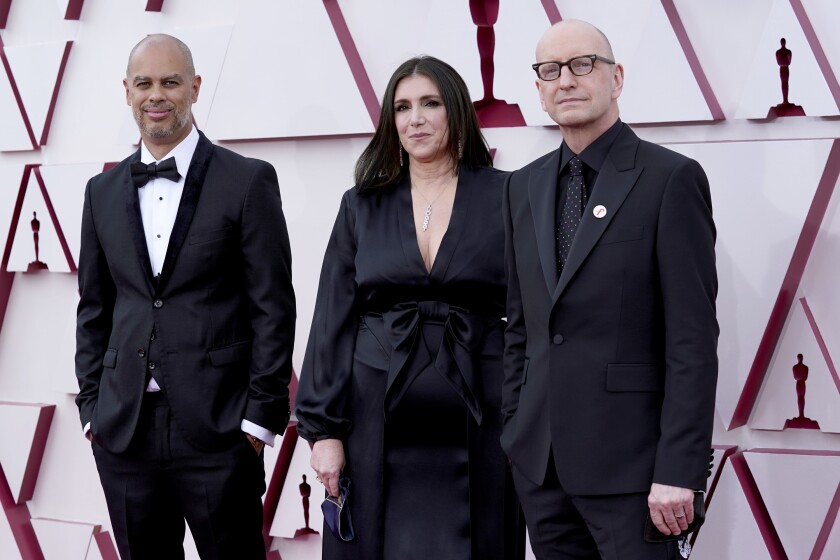 That off-key Oscars ending? Had to be done, says producer Steven Soderbergh

The new season is written and directed by Berlin-born, U.S.-based Anja Marquardt, best known for her 2014 feature film “She’s Lost Control.” . Along with executive producing “The Girlfriend Experience,” Soderbergh has been characteristically busy. He already completed production on the film “No Sudden Move,” starring Don Cheadle and Jon Hamm, and is more recently shooting “KIMI,” starring Zoë Kravitz. He also, of course, was involved in producing the recent Academy Awards ceremony.

Marquardt and Soderbergh were in separate locations in Los Angeles when they recently got together on a conference call to discuss the third season of “The Girlfriend Experience” with The Times. The interview has been edited for clarity and condensed. 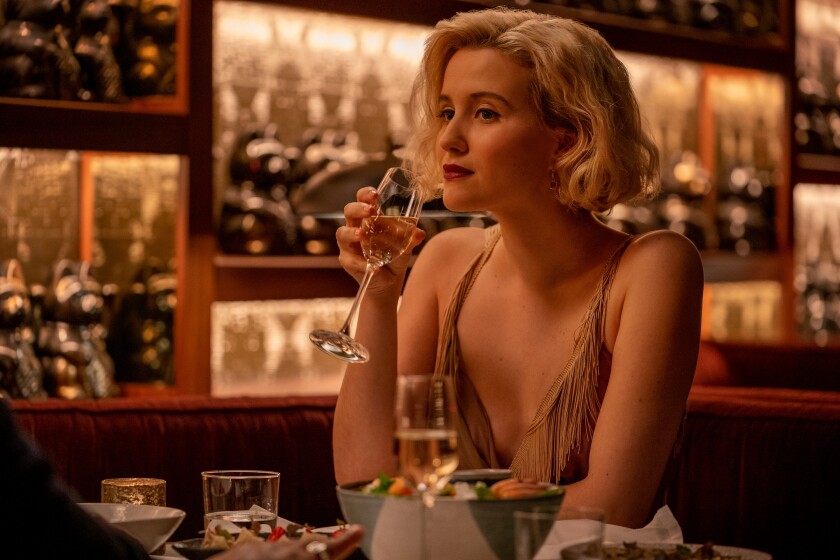 Julia Goldani Telles in a scene from Season 3 of “The Girlfriend Experience.”

Steven, why bring the show back now?

Steven Soderbergh: Well, our plan was always to, every two years, bring on a new filmmaker, or filmmakers if they were paired. So we were hoping that Starz would want to move forward. And they did, and it just took us a while to settle on what Season 3 should be. And Anja can speak to that in more detail. She had a completely different season all mapped out that we ended up pivoting from to what you saw.

Anja Marquardt: In some drawer there’s now 13 episodes of a version of the story that is very different in content and context, and based on a novel by Allison Leotta, who used to be a federal prosecutor in a former life and had written a very interesting foundation for a potential season. And the core of what Season 3 was going to be changed a bit once the network realized that what they really wanted to focus on was a more global approach set in London with a younger protagonist, one storyline that is chronological. My adaptation of Allison’s novel had a dual timeline at its core.

What was it like for you to adapt to television storytelling? There’s a couple of very big story shifts that happen through the season. So much happens even in just the last two episodes. How was the learning process of how to write for television?

Marquardt: I had a fairly good grasp on how to write for the given budget at hand and how to keep the bird’s-eye view to get it done within certain parameters. I was like, “OK, this is the franchise. I’m going to try my best and honor that, build upon it, and also create something that hopefully is surprising and new and different and worthy of a next chapter.” And so I had sort of two impulses. The first one was that I was coming to the world of “The Girlfriend Experience” at a time that #MeToo had happened. The cultural conversation about how to navigate a lot of things had radically changed. And so I brought to the table pretty much everything that was interesting to me at the time, which was artificial intelligence, future-facing technology and how the hell we’re all navigating that as an issue.

In terms of how I broke down 10 episodes and tackled the writing, that was pretty organic. My biggest tool at some point was a giant spreadsheet with different rows and columns and colors. And every subplot scene, turning point and character [would] have different colors, so I could print it out and look at it and play around with how the season would be structured.

Marquardt: Well, you should see my room right now. It comes and goes. 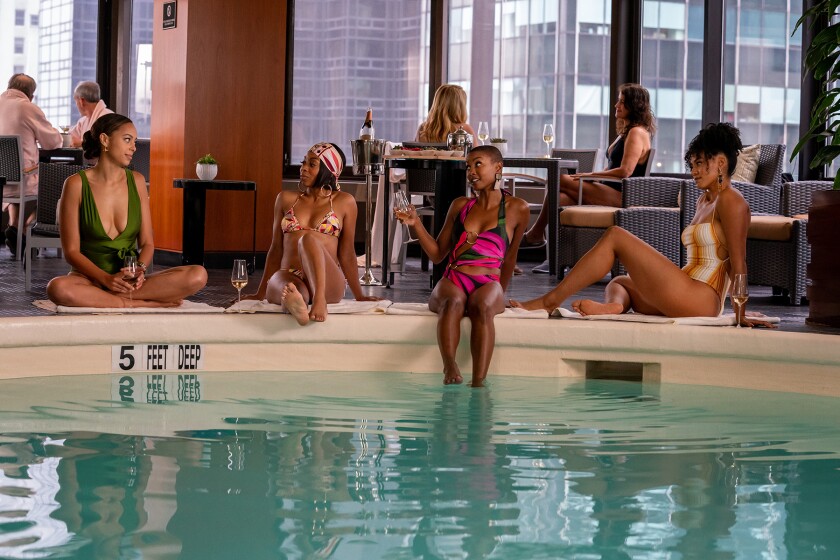 It’s OK to call this new comedy the Black ‘Sex and the City.’ On one condition

Soderbergh: When I think of the term cinema, I’m thinking of an approach, I’m thinking of a singular directorial vision, and I’ve seen commercials that have it and award-winning films that don’t. So the format to me was just interesting. If you’re talking about a full half-hour, I’d rather have a dense 28-, 30- than a padded 49-, 50-minute episode. And so when we settled on that format for the first season I became very enamored of it. I thought the half-hour drama was actually a really great way to tell the story, because you get more chances at ending an episode. Ending an episode is really fun — figuring out what the last image is going to be to sort of push you into the next episode. And to have 10 opportunities or 13 to come up with cool endings for episodes is more fun than six.

Marquardt: The crazy thing is that I don’t think creatively it had any influence or any bearing on how we were approaching things aesthetically or visually at all. We obviously spent a good deal of time figuring out how to do this safely, and by incorporating the protocol Safe Way Forward that Steven had spearheaded with the DGA and then the equivalent in the U.K., and we sort of figured it out and then got up to speed pretty quickly. We had a test shoot day, where we shot the confessionals video that is part of Episode 2, and we just kind of used that as a day to see how we would fare in a smaller team. And I think in general it did help that we weren’t a “Batman”-sized crew. We were able to be strategic about the workflow on-set and minimizing contact points and so forth. Believe it or not, that scene that you were referring to, that virtual party scene in Episode 6, that was all scripted way before the pandemic. 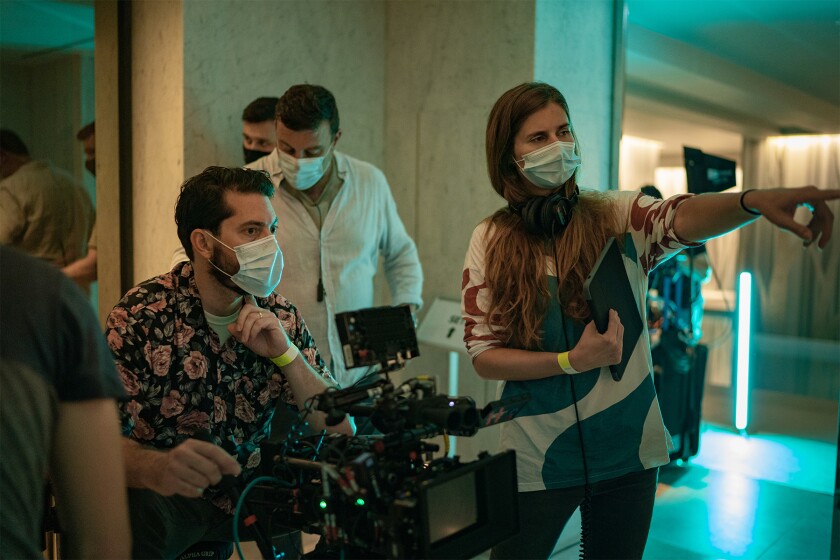 Cinematographer Zachary Galler, left, and writer-director Anya Marquardt during production on Season 3 of “The Girlfriend Experience.”

Steven, have you found the same thing as you’ve been shooting under the safety protocols? Is it less of a hindrance than one might think it would be?

Soderbergh: Yeah, it’s manageable. I think my experience is that when you’re on set, it’s not slowing things down that much. It’s the getting to set and then off of set that extra time is added, just moving people around, processing them, sending them to lunch takes longer. You can’t put as many people in a vehicle. You’re testing people constantly. But the key is making sure that people have bought into the protocols when they’re not at work. You can be fairly confident that an exposure is not going to take place on the set. What you have to contend with is the 12 to 14 hours that you do not control the cast and the crew and what they do when they’re at home. Luckily in the case of “GFE” 3, which was one of the first substantial productions to start shooting in the U.K. during the pandemic, and on the 1 2/3 of a film that I’ve shot, so far we haven’t had any problems. So that means people have taken the guidelines seriously and are making sure they live a low-risk lifestyle off-set. And that’s really the key.

A central element of “The Girlfriend Experience” is this tension between someone’s work life and their real life or their sort of outside life. Anja, you have Iris’ work for the escort service and her work for the data company, but then there is this additional layer of online life as well. Did setting the story in the tech world and grappling with artificial intelligence allow you to explore this virtual world?

Marquardt: Absolutely. I would add that there’s then the fourth component to her life that has to do with her family and ultimately her own future. I think the question that sort of echoes across all the episodes for Iris is, “Who am I and where does the simulation of me begin?” And it seemed to me that the tech angle specifically, the angle of using behavioral data to teach artificial intelligence, that was going to be an interesting counterpart to the simulation that is happening on “The Girlfriend Experience” side.

When Iris goes in and adapts really quickly to what any given client wants from her, she slips into these different worlds, different versions of herself, and creates the perfect simulation in a way. So it seemed like we could ping-pong back and forth between the two different modes. The virtual has an overlap with both of them, and without trying to give away too much, it’s not really about upholding the two sides of the life — they do converge.

Soderbergh: What I liked about it was this interesting iteration of our quixotic belief that technology is somehow going to solve our personal problems. And I just hadn’t seen it explored in this context before. But we labor under the delusion we always have, and I think we probably always will, that there’s going to be this one new piece of technology that’s going to unlock the secret of attraction or desire or love or any of that stuff that we’re going to have. We’re going to evolve into some 2.0 version of ourselves through a new piece of technology. And history tells us it doesn’t really work that way.

Steven, so much of your work has to do with people navigating the divide between their personal lives and their professional lives. What about that fascinates you?

Soderbergh: I guess it grows out of an interest in the ways in which our ideas of ourselves and our ideas of how the world functions and how other people behave line up with our expectations. And when you’re talking about identity, and you’re within a certain culture that sends you messages about your worth based on what you’re doing or how you look, I’m just fascinated by how we all grapple with that. Especially when the two things don’t align, which in my experience, they usually don’t align. There is a very big difference between who you think you are and what you think you’re doing and what it means, and the reality of that. And then once again, whose reality of that are you using and how much of your belief system have you swallowed without thinking and how much of it has been constructed mindfully?

And work, what people do to make money, is interesting to me because everybody has to confront this issue. At some point we all have to look around and figure out what we’re going to do for work. I’m always interested in what characters do to pay the bills.

How is GFE different?